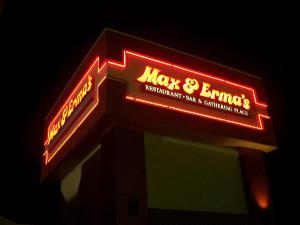 Last week’s announcement that Max & Ermas Restaurants (MAXE) had a rough second quarter, with the weak economy and the March blizzard hurting top and bottom lines, made us wonder whether we should expect yet another busted buyout. After all, bad quarterly results have triggered quite a few merger cancellations, for the most part unjustifiedly. However, when we saw KeyBanc’s (KEY) deplorable fairness opinion we were convinced that the buyer is getting such a good deal that there is a lot of room for deteriorating performance before the deal will be called off.

MAXE has spent about one year trying to sell itself. CEO Robert A. Lindeman and CFO William C. Niegsch Jr. had their employment agreements changed Yahoo-style in September, when the sale of the firm was well underway, to include a comfortable change-of-control payment. In the end, Pittsburgh restaurateur Gary Reinert Sr. proposed a price for Max & Erma’s that management “viewed favorably” and he won the deal. It is not clear to us how much of a price check management actually did, and how actively other potential suitors were encouraged to top Reinert’s bid and maximize shareholder value.

One hint that the board may have been less active than shareholders would expect is the fairness opinion by KeyBanc Capital Markets, which strikes us as one of the weakest fairness opinions we have seen in a while. We have discussed questionable fairness opinions before, such as the one in Jerry Moyes’ acquisition of Central Freight, or in Netsmart. A common trait is that the author of the opinion goes to great lengths to discredit their own findings that the merger consideration is at the low end of, or even below, the valuation range that they determine. In KeyBanc’s case, only the premium paid analysis looks favorable. That does not surprise us, because Max & Erma’s has been dropping like a stone last fall, pricing in a worst case scenario, so any premium looks good.

Most striking the the Leveraged Buyout Analysis provided by KeyBanc that uses cost of capital of a whopping 22%. Here is what they say:

“KeyBanc calculated a 22.0% weighted average cost of capital, or discount rate, using the Capital Asset Pricing Model and the cost of capital for the comparable public companies.”

We will readily admit that we have no idea what inputs they entered into the CAPM model, but we are pretty sure that nobody uses a 22% cost of capital in the restaurant industry. KeyBanc goes one step further and show us the sensitivity of their calculation at +/- 2%. We are sure that even a 20% cost of capital is way out of the range of normal rates. The $150,000 KeyBanc charges for its opinion is a very steep price for such a nonsensical analysis.

In light of the not so fair fairness opinion, we have no doubt that the deal will go through. Merger agreements usually have a clause that allow a buyer to terminate the agreement if too many shareholders seek appraisal. In Max & Erma’s case, we notice that this threshold is an unusually high 12.5% of outstanding shares. Clearly, Gary Reinert knows he is getting a good deal and is expecting that some shareholders will not be happy with $4/share. And therefore, a bad quarter will not make him pull out of the deal.

This entry was posted on Tuesday, June 24th, 2008 at 10:47 pm and is filed under acquisitions, Activist Investing, Arbitrage, Buyouts, corporate governance, Mergers. You can follow any responses to this entry through the RSS 2.0 feed. You can leave a response, or trackback from your own site.